Violence against women and girls takes many forms, from physical and mental violence in abusive relationships to more structural forms of violence that define women as the ‘other’ of the male norm, and as subject to the institutionally entrenched power of men.

With my students in Introduction to Political Philosophy, I have in recent weeks read (excerpts from) classical texts such as Mary Wollstonecraft’s A Vindication of the Rights of Women (1792), John Stuart Mill’s On the Subjection of Women (1861/69), and Simone de Beauvoir’s The Second Sex (1949). Each of these feminist thinkers sees the underlying institutionally entrenched subjection and denigration of women as the main mechanism in which more direct physical violence takes place.

Given the struggles we see in Iran today, we should have added work by Shirin Ebadi, Janet Afary, or other influential Iranian or Persian authors on women’s rights. Reading a little about feminism in contemporary Iran, I learned that there is a divide between authors who argue that Shi’i Islam can be hospitable to an equal status for women, and authors who formulate a more external and radical criticism, which is beyond hope for internal reform. But whatever the different views in the debate in Iran, many of these feminists will currently stand for the same cause: an end to the violence, and greater liberties and fair and equal treatment for women in Iran.

People who stand up against misuse of power show courage in exercising one of the main human powers: saying no to injustice, and saying no together. I know too little about the situation in Iran. But I do seem to notice, as many distant observers have, that women with and without hijab protest together, and protest with men by their side: there is diversity among these protesters. Irrespective of their differences, they do not want to be governed this way. 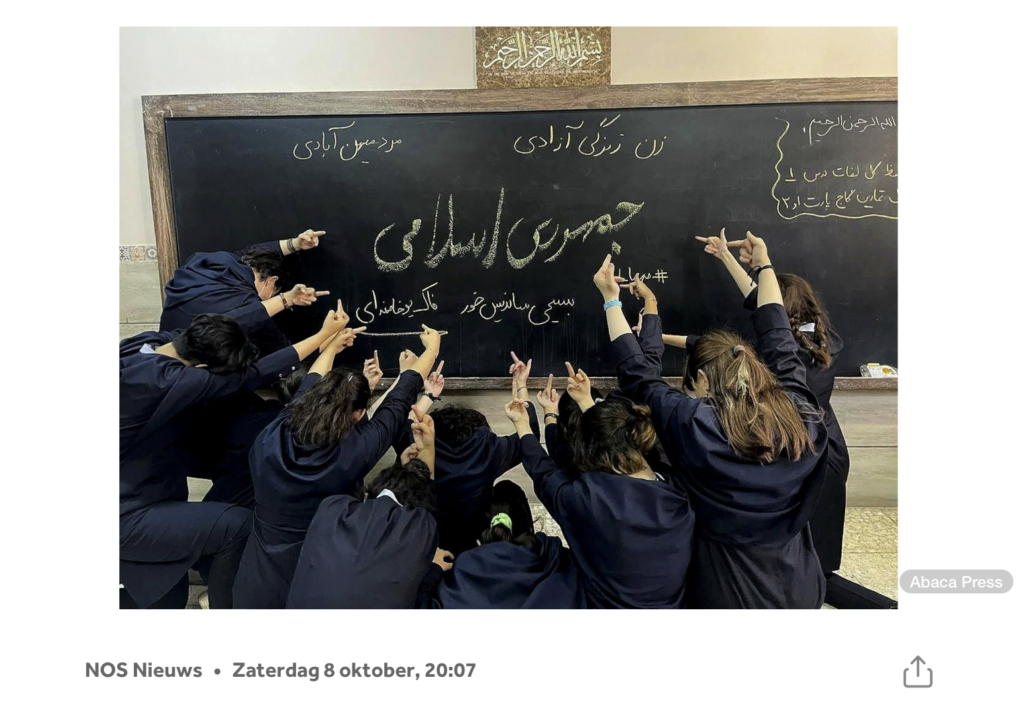 What they are saying no to appears to be not just the hijab but the institutionally entrenched power of the Iranian regime to determine how women and girls should appear in public. The protests against the forced wearing of the hijab symbolizes much more: it is a protest against the fundamentalist belief that, in the given religious and political order, women and girls should not be free to determine the course of their own life.

We cannot claim that men are free to make such choices under this fundamentalist theocratic regime. But men do take a different position in the status order. As I heard the Iranian-Dutch philosopher Heidi Dorudi explain recently: women in Iran need a male guardian in almost every aspect of their personal and public lives. This makes it reassuring that we see many protesting young men in the images and pictures of protest that come to us through the media. They refuse to be guardians for these women.

My worldview is very Western so I call on a Western feminist to make sense of this. As Simone de Beauvoir explains in The Second Sex, one of the great difficulties for women in struggling against violence is that it is hard for them to form a powerful ‘we’ around their causes. For how should that ‘we’ be defined, what should it be directed against? By women’s side will often be men, not necessarily bad men, fathers of their children, friends, lovers, soul companions.

For women to be able to stand up for their causes, they need these men to stand up with them; men need to form a ‘we’ with them. Such a ‘we’ says no to the powers that be, and does so from a diverse group of people, which is, however united in how it does not want to be governed. Without broader support, women will easily be portrayed as the frustrated, difficult others’ of the male societal norm. As othered, women will be expelled from societal ‘normality’ and become even more vulnerable to violence.

De Beauvoir’s 70 years old observation helps me understand why feminism and saying no to violence against women and girls should not be thought of as ‘something for women’, but as a legitimate cause for all who care about liberty and equality. This is not meant to say that in the end, men will turn out to be the heroes of feminist struggle. Women are, for all the right reasons. Women need support from all who recognize this cause.

This is why the Orange the World weeks, which stretch from November 25 — The International Day against Violence against Women — until December 10 — International Human Rights Day — is as urgent as ever. Not Your Honey organizes a series of events around the subject, and University College Roosevelt is proud to have many students and members of faculty and staff who continue to stand up for these causes.