All adventurers met at Helm Square, ready to travel around the world and compete for clues and points, leading them to their next destination. Each team consisted of two brave adventurers, who began their journey with a clue in their hands, leading them to their first stop on their travels around the world. Of course, they had to solve the riddle before knowing where they would go.

“Meet me where the wind blows; at the base painted the color of peace I’ll be watching the flowers on the water grow” was one of the riddles which were solved by all teams with great excellence. They embarked on their journey to Europe, positioned near the De Hoop, a windmill with a name that translates into “hope”. Hope is what they had when they arrived and learned about their first challenge: Hammerschlagen. This is a German game with the goal of hammering a nail into the wood as deep as possible. The team came, saw, and conquered.

“Meet me at the building that, were it not so far, looks somewhat like UCR; it’s close to where you fill your shopping cart.” With this new hint in their hands and new hope in their hearts, they continued to South America, to play a Peruvian game called Sapo. Here, the goal was to toss coins into certain holes that all represented different amounts of points, with a little frog in the middle.

“Meet me where the grass grows by our houses that lay in rows.” Having solved this riddle, the team continued their journey to Oceania, where the game of Marbles was played, a game using marbles like the name suggests. Those marbles are organized within a circle, with the goal of hitting the marbles out of the circle by throwing your own marbles at them. After successfully striking out the marbles in the circle they took a dive over to Africa.

The clue “Meet me at the fountain of fate, nearby Middelburg’s only surviving city gate.” led them to the station where the game of Tsoro Yematatu was played, a Zimbabwean game comparable to the western game Tic Tac Toe. After uncovering the meaning behind “Meet me at the gazebo to increase your score; you’ll find it near the juggling store,” they were ready to continue their journey. The team sailed all the way over to Asia, where they played Flowersticks. Here, the goal was to juggle one stick with the help of the two others, one in each hand. 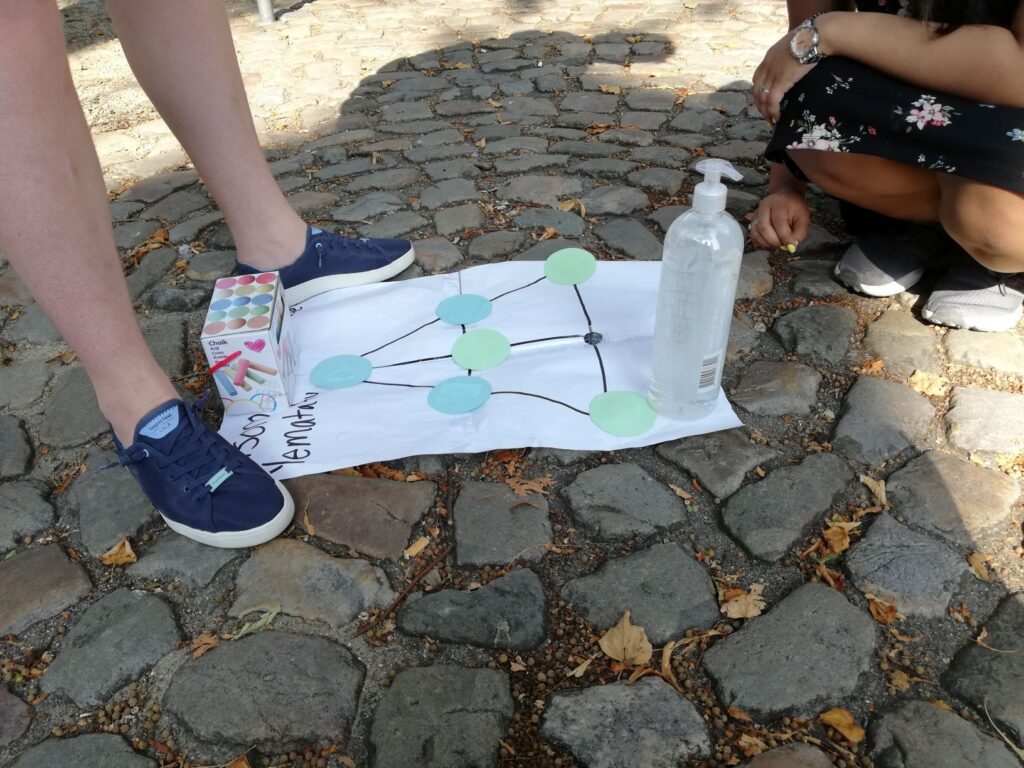 Following “Meet me at the courtyard with lines on the ground; here you can hear bells make their quarterly sound” the team continued to visit North America for a round of Tierra, Mar y Aire, aMexican game that translates to: “land, sea, and air”. In this game, teams played against the clock to see how long they could last, having to jump over a line from “land” to “sea” or jumping high in the air for “air” as the game master directed. While the game progressed, the directions turned from naming the atmospheric realm to things you could find there (e.g.: tree, shark, or bird). Once the teams completed the game, they got their next clue “Meet me where we all began” leading them to the final stop on their adventure around the world.

Last but not least, the team finished their journey in Antarctica, where they were reunited with their opponents. The last challenge was a game called Happy Feet, with the goal being waddling faster than the other teams while carrying a balloon between their legs. All teams gracefully succeeded at this game, leaving it up to the coordinators to count points and announce the winners. All along on their journey, the teams had the opportunity to cross small hurdles for extra points which would get them closer to conquering the hunt, by submitting images for additional challenges, such as finding your favorite game at a bookstore or taking a photo of a restaurant with your favorite cuisine. At the end, teams received a certificate to celebrate the completion of their quest.

We hope that all the teams enjoyed their adventure because, even though winning feels great, just like the saying says: “The journey is its own reward”.